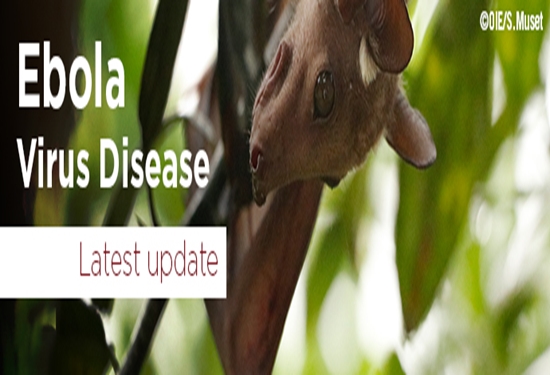 Ebola virus disease (EVD) is also known as Ebola haemorrhagic fever and is considered to be an emerging zoonotic disease. EVD is a severe contagious disease affecting humans and non-human primates. It can be transmitted to humans through direct contact with tissue, blood, other body fluids, and excretions from an infected human or animal. The causative agent is classified in the genus Ebolavirus of the Filoviridae family.

There are several species in the genus Ebolavirus (EBV) these include: Zaire ebolavirus (EBOV); Sudan ebolavirus (SUDV); Bundibugyo ebolavirus (BDBV); Reston ebolavirus (RESTV) and Taï Forest ebolavirus (TAFV). All have been detected in Africa only, apart from RESTV. RESTV was isolated in 1989-90 in Reston, Virginia (USA) from macaques imported from the Philippines. In 2008, pigs from pig farms close to Manilla (Philippines) also tested positive for RESTV.

Up to 2013, EVD occurred mainly in remote rainforest areas of Central and East Africa (DRC, Sudan, Gabon, Republic of the Congo and Uganda). West Africa had only been known to be affected by a limited episode of Taï Forest ebolavirus (TAFV) in the Ivory Coast in 1994. However, a severe epidemic, starting in 2013-14, affected a large West African region (mainly in Guinea, Sierra Leone and Liberia). For the first time, the epidemic penetrated densely populated areas including capital cities, increasing the risk of wider spread. Since 2014, three new outbreaks have occurred in the Democratic Republic of Congo.

The natural reservoir of Ebola has not yet been confirmed. However, the results of field studies, laboratory research, and epidemiological surveys in Africa strongly suggest that fruit bats may be natural hosts for EBOV and they are currently thought to be the principal animal reservoir. Indeed, research results suggests that some bat species may carry the virus without showing clinical signs of illness.

The related Marburg virus has been isolated from fruit bats (Roussettus aegyptiacus) in Uganda.

Susceptibility of pigs to EBV has been demonstrated in the laboratory setting, but their role in EVD epidemiology is unclear. Antibodies to EBV have been detected in dogs. So far there is no evidence that domestic animals play an active epidemiological role in the transmission of the disease to humans.

Ebola virus disease is initially introduced into human populations through contact with infected wild animals to humans and is most likely associated with hunting, collection of sick or dead wild animals and handling or consumption of uncooked bush meat. In rural areas fruit bats are a popular source of forest meat for humans and are prepared by hand to be dried, smoked and/or cooked. Infection of humans through consumption of forest fruits contaminated with bat saliva or faeces is also a suspected transmission pathway.

During EVD outbreaks in humans, human to human transmission occurs through contact with body fluids or excretions of an infected person.

For information about Ebola in humans please refer to the World Health Organization (WHO) Ebola Virus Disease Website and Factsheet, and the CDC Website.

Reporting to the OIE

Currently Ebola virus is not an OIE listed disease.

However, in accordance with the Chapter 1.1 of the OIE Terrestrial Animal Health Code on Notification of Diseases, Infections and Infestations, and provision of epidemiological information, detection of Ebola virus disease or infection in animals (domestic animals or wildlife species which qualify according to OIE definition of ‘emerging disease’) should be notified by the Veterinary Authorities to the OIE as an emerging disease (Article 1.1.4.).

Ebola virus should also voluntarily be reported through the annual report on wildlife diseases as “Infection with filoviruses”.

An EMERGING DISEASE means a new occurrence in an animal of a disease, infection or infestation, causing a significant impact on animal or public health resulting from a) a change of a known pathogenic agent or its spread to a new geographic area or species; or b) a previously unrecognised pathogenic agent or disease diagnosed for the first time.